In this post, I’ll explain how I finished building the concrete pier for my roll-off roof back garden observatory. In the previous post, I covered the groundwork for the pier, and this time I will explain the process of building it.

The pier foundation and pier are constructed from concrete, as are the shallow observatory foundations. I decided to use bags of ready-mixed concrete for the job. Mixing concrete from bulk bags of cement and ballast would certainly be cheaper, but moving and storing them would have been difficult for me. Individual bags of ready-mix are much easier to handle, store and keep dry over the course of several weeks’ work. 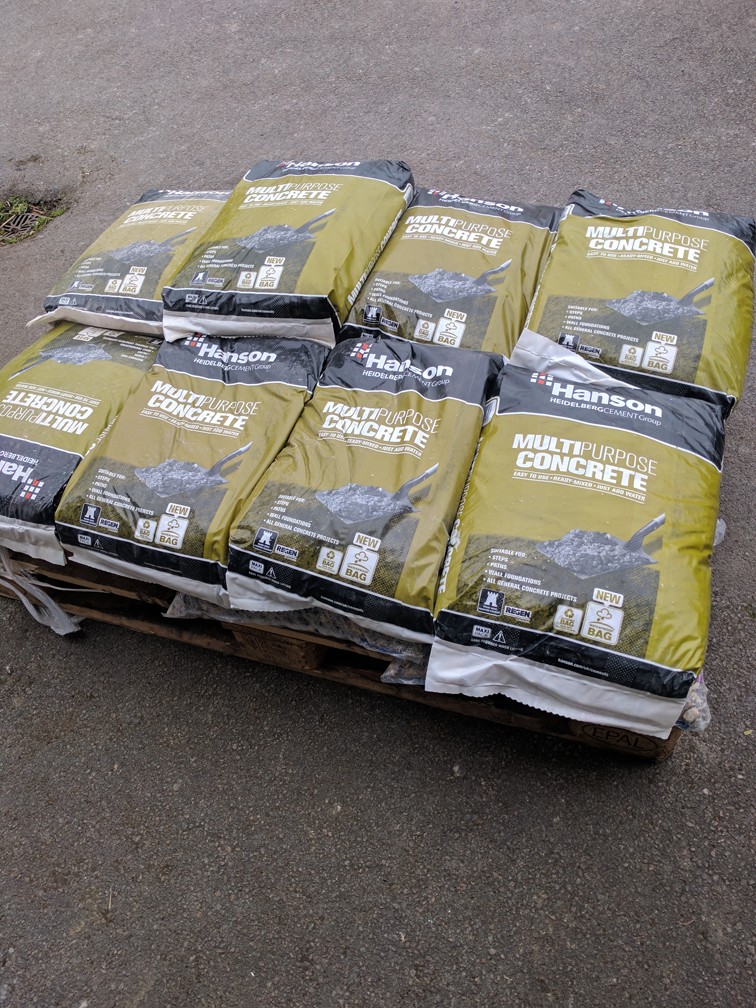 I calculated the total volume of concrete I would require; just multiply the height x width x depth of each concrete element in the plans and add them all up. The result was 0.22 cubic metres, which doesn’t sound like a lot, but after mixing and shovelling 600KG of the stuff I can assure you it is!

There are a number of concrete calculators available online that will allow you to determine the weight of dry mix you need for a given volume. I found the results varied slightly so I took my best guess at about 25 x 20KG bags. This turned out to be a few bags short of what I actually used, but it was easy enough to pick up more from the DIY store.

I mixed all of the concrete in small batches in a large plastic tray using a shovel. I followed the instructions on the packaging. but be aware that concrete goes from too dry to too wet very quickly, so don’t add too much water in one go. Mixing was a fair bit of hard work and a small concrete mixer would have been easier, but it saved on trips to the gym! 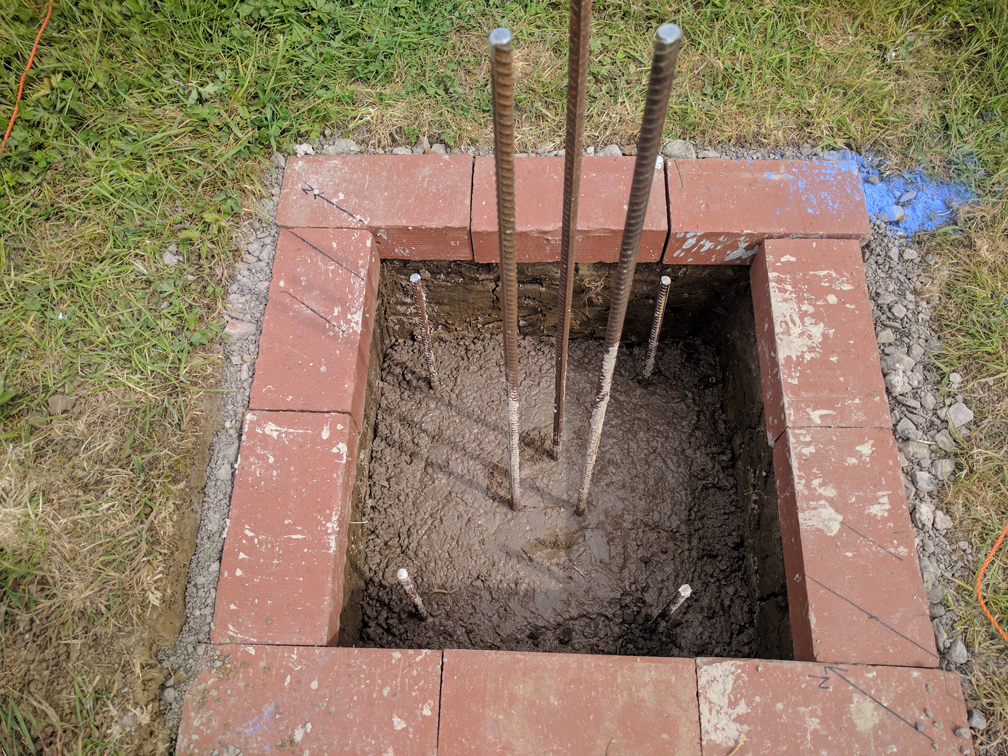 I obtained a six inch (152mm) diameter steel tube from eBay, pre-cut to a length of one metre. Surprisingly this was delivered by courier along with the rebar. The six inch tube would have been too narrow for a long visual pier, but is perfectly adequate for my short imaging pier. It would support the weight of mount and scopes on its own, but I doubt it would have been free from vibration and flexure unless filled with reinforced concrete.

I checked the positioning of the rebar using the steel tube, removed the tube and then poured the concrete for the bottom of the foundation. As previously noted, wet concrete on to dry concrete does not form a good bond, so the rebar is vital to join both halves. The first pour was about 1,200mm deep to form the base on which the steel tube for the pier would sit. I felt it would be easier to accurately position the tube on a solid base rather than trying to suspend it in a single pour of wet concrete using a form-work.

I thoroughly wetted the sub-base layer and the clay walls of the foundation before shovelling in the concrete. This helps prevent the moisture leaching out of the concrete whilst it is curing. I used a thick wooden stick to ram the concrete in to the corners and to try to remove air bubbles. Using a concrete vibrator is recommended to remove all the air, but I didn’t have one to hand. Given I was using a thick steel tube and rebar, I was less concerned than if I had been making a bare concrete pier using a temporary form or a thin air conditioning duct. I then covered the hole and left everything to dry overnight. 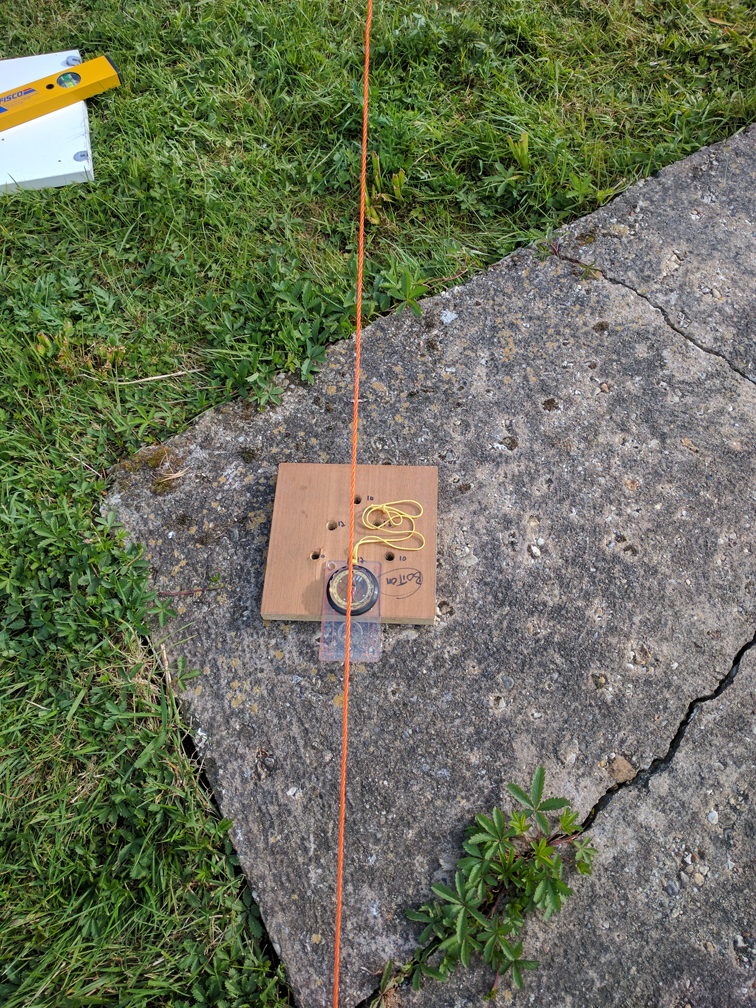 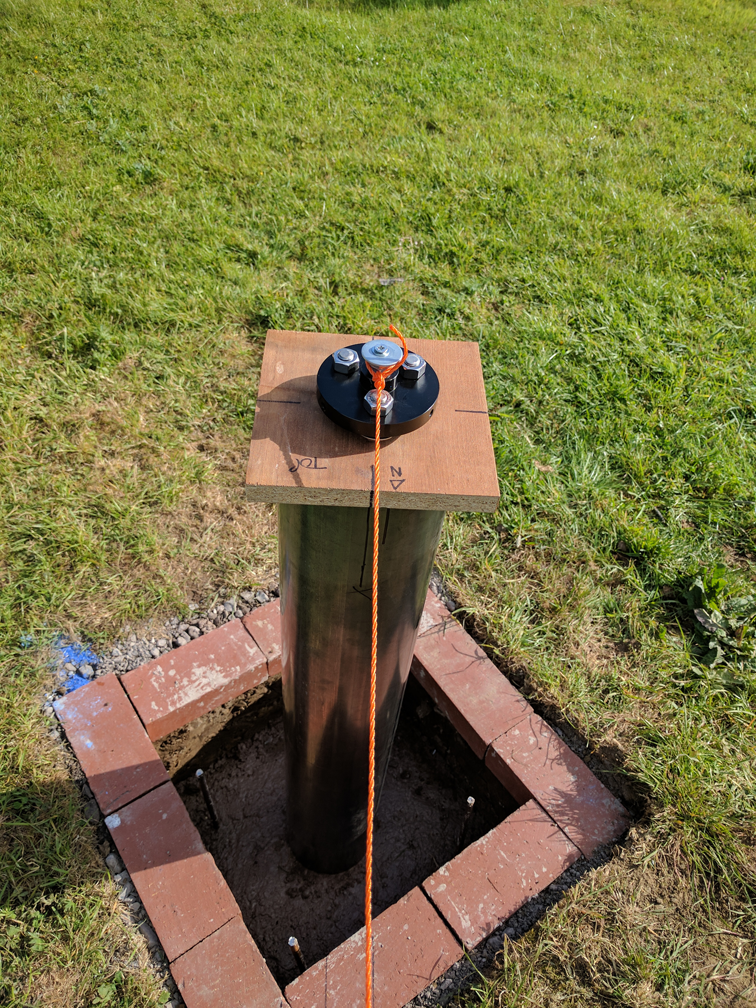 I next positioned the pier tube on the cured concrete surface and aligned the wooden pier head template (with the black anodised disk and stainless studs attached). You will note that I made a new template minus the rebar holes to prevent concrete escaping once the pier was filled. I also inserted angled screws in the the bottom of the template around the circumference of the steel tube to locate it centrally on the tube.

I attached a line to a screw in the central boss of the anodised disk and ran it out over the compass to a peg in the ground to find North. Remember that you may need to correct for local magnetic declination in your area if using a compass. I then marked the tube and template so that I could accurately re-align them to the pegged line once the concrete was poured. 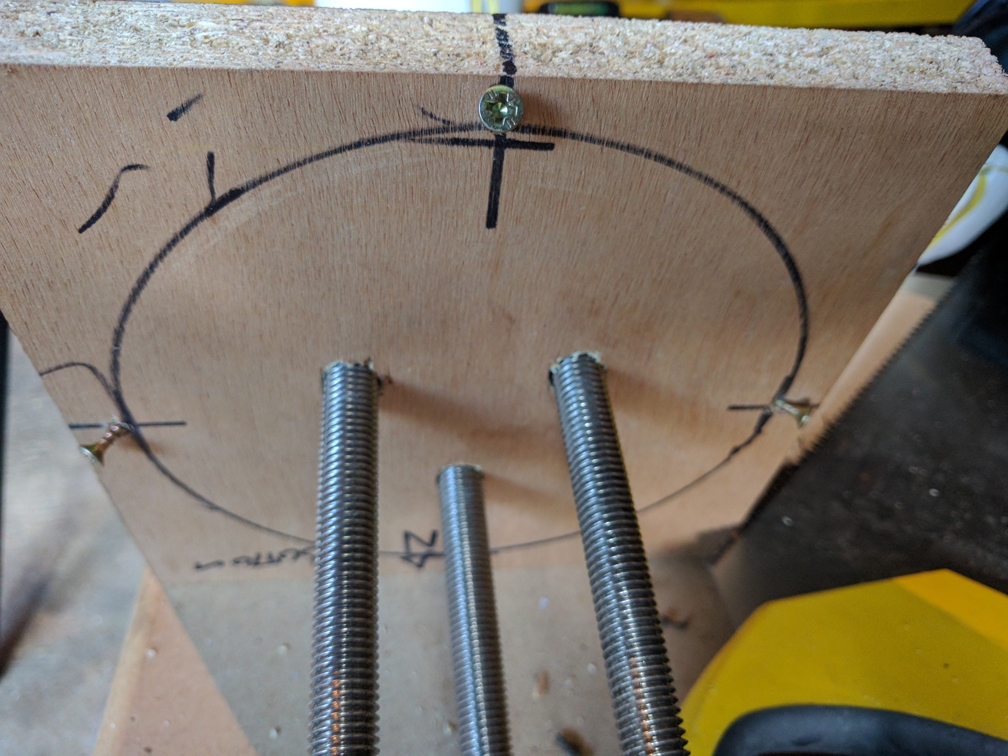 With the tube in place, I then filled the rest of the foundation block to the level of the brick surround and also filled the tube to the top, ramming the concrete as best I could to remove any air pockets.

I had previously made a wooden support which could be dropped over the pier tube once the concrete was poured. To do this, I cut in half the pallet used to deliver the concrete, cut a gap in the the middle slat just wide enough for the steel tube and then screwed in a couple of cross braces cut from another slat. 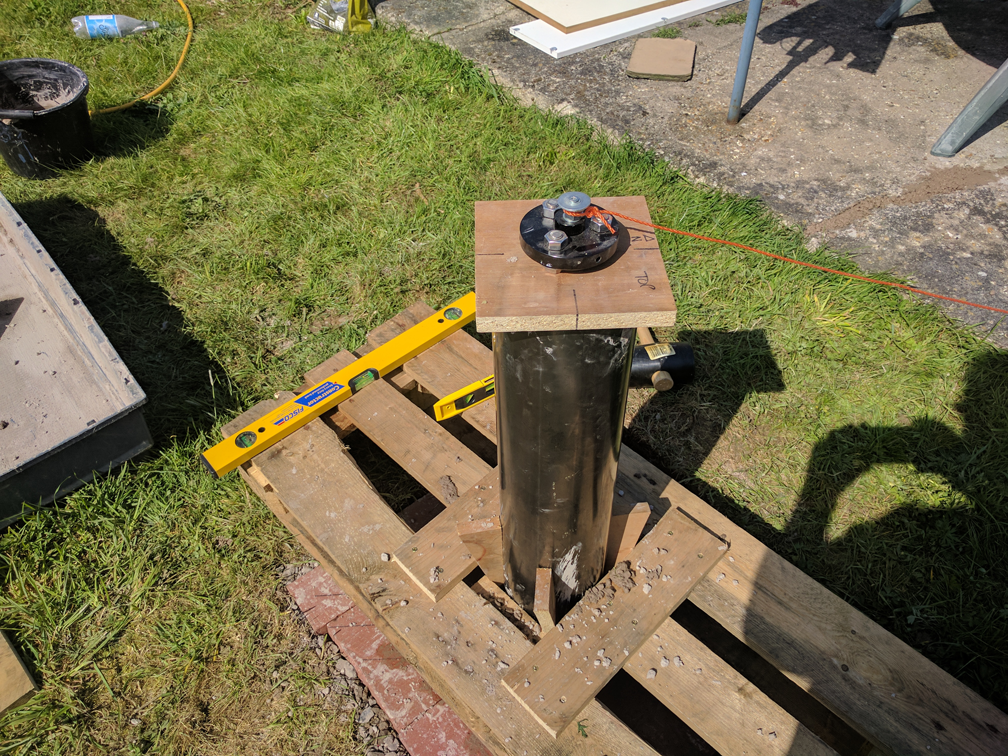 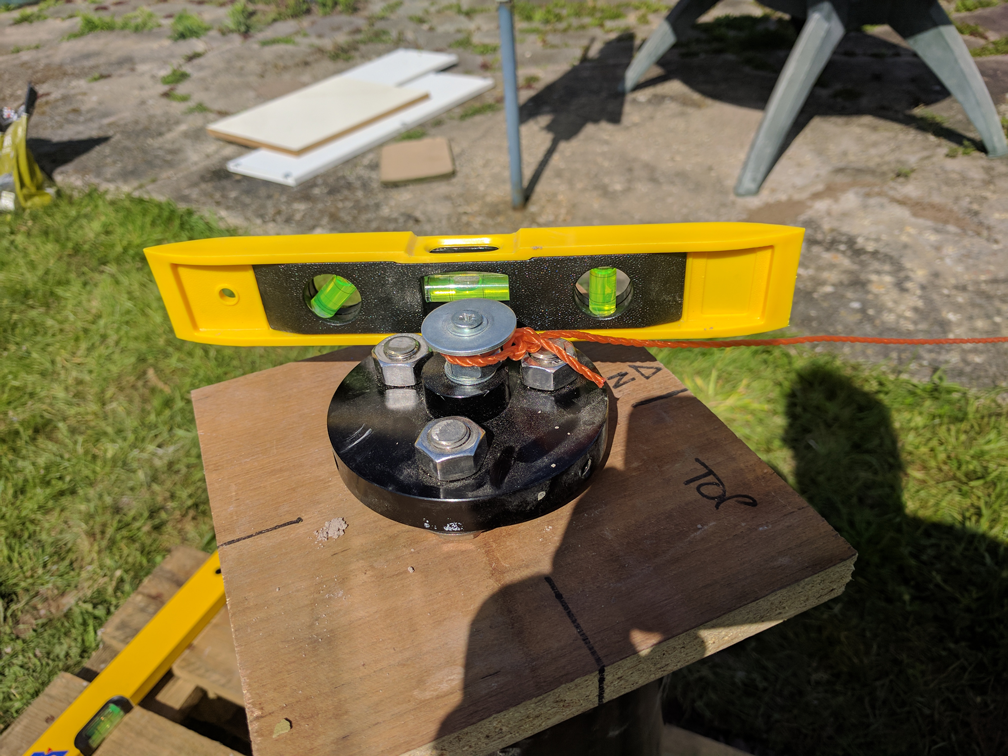 The steel tube was levelled by tapping wooden wedges in to the pallet support until a bubble level showed the tube to be vertical on both the North-South and East-West lines.

Next the pier head template assembly was slid in to to the concrete-filled tube. I did my best to ensure there were no air bubbles around the stainless studs, and that the top of the concrete was level with the tube and in contact across the bottom of the template. I double checked the alignment of the anodised disk to North several times as there was no going back once the concrete cured. I also checked that the disk was level on both axes.

[box type=”info” style=”rounded” border=”full”]Contrary to popular belief, it is not necessary for the pier or the mount to be level in order to polar align. It is a bit easier for sure, since adjustments in altitude and azimuth don’t affect each other when the mount is level. That said, the pier only needs to be roughly vertical (to minimise unnecessary bending moments on it), and there is no need for complex levelling devices. The ubiquitous “Rat’s Cage” of two plates separated by four levelling bolts is likely to cause more problems than it solves by allowing the pier head to flex.[/box]

Once I was happy, I left the concrete to cure for about a week before dismantling the template and wooden support. 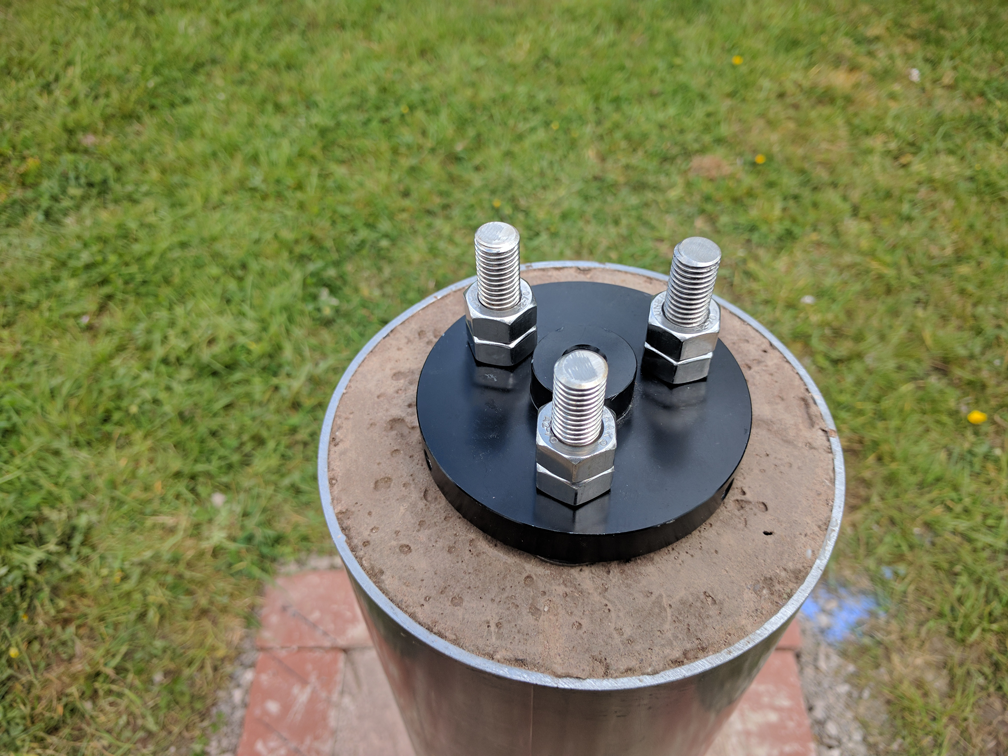 The last step was to assemble the tripod extension on to the pier. I slid the black anodised disk over the protruding stainless studs and bolted it in to place with two nuts per stud, one to tighten the disk down and the other as a locking nut. I then attached the extension tube and the top plate and checked for level and movement. As the extension tube protrudes below the bottom of the anodised disk, it proved necessary to add some large stainless washers over the studs between the concrete and the disk in order to align the screw holes in disk and tube.

Once I loaded up the extension tube with the NEQ6, scopes and counterweights, it became apparent that the extension tube could flex by several degrees when gentle pressure was applied to the mount or telescope. The tube is not a flush fit with the anodised disk and can tilt with respect to it even if the hex-cap screws are well tightened. When installed on a tripod, this tilt is eliminated as the base of the tube sits in a recess around the tripod head. On the concrete pier head minor irregularities in the surface do not support the tube around its full circumference. 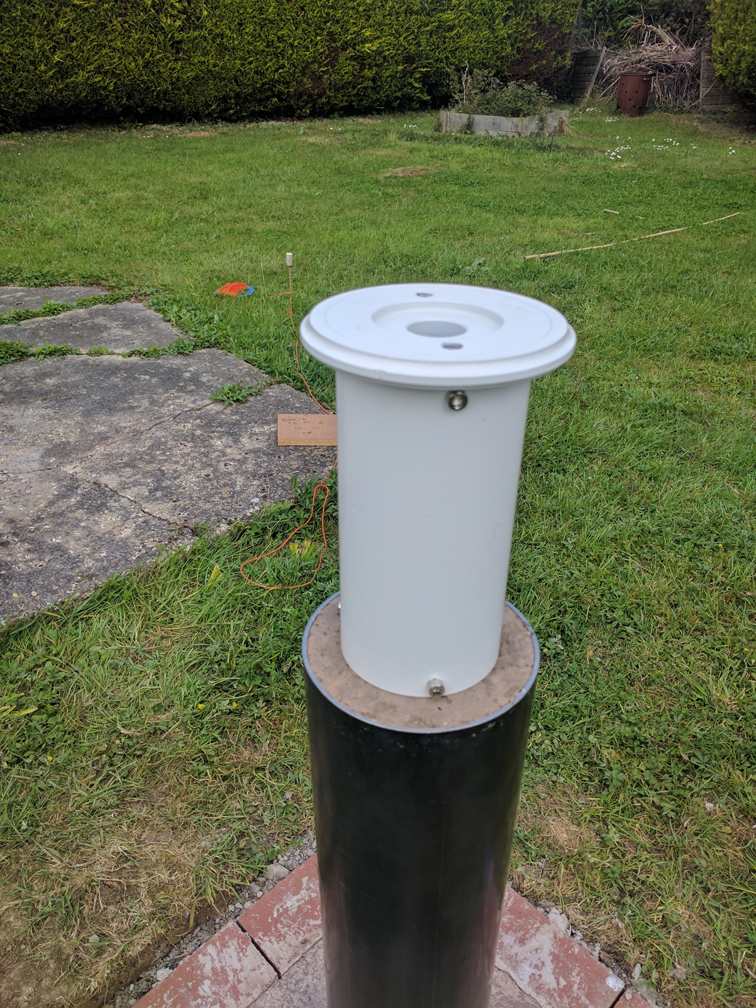 I overcame this by:

The only other issue that I have encountered is that the central bolt which attaches the mount to the extension needs to be very well tightened to prevent the mount unscrewing itself during polar alignment. This makes azimuth adjustment is quite stiff. A ball bearing assembly is fitted as standard between the underside of the extension top plate and the central bolt to help with this, but it doesn’t seem particularly effective.

With a bit of effort I successfully polar aligned the mount, but I am considering fitting a large Teflon washer between the mount and extension. Longer azimuth adjuster bolts with bigger handles are available and would also help.

In the next post we’ll start work on the foundations and main support posts.

2 thoughts on “Building a Small Imaging Observatory – The Pier”