I have been experimenting with meteor detection using radio forward scatter from the GRAVES transmitter and have developed an improved set of conditional actions for identifying and logging meteor events using Spectrum Lab. If you’re interested in trying this for yourself, then everything you need to get started is explained in a couple of articles by Paul Hyde of the BAA Radio Astronomy Group which were published by the Sky at Night Magazine. The articles and a lot of other useful information can be freely downloaded from the BAA web site. Unfortunately the Spectrum Lab configuration files referred to in the original Sky at Night articles no longer appear to be available following reorganisations of both the Sky at Night Magazine and BAA web sites. There is some limited information on setting up Spectrum Lab in the “Techniques for using the RTL Dongle for Detecting Meteors” article linked on the BAA web site.

I won’t repeat the contents of the articles, which comprehensively explain how to build an antenna and receiver equipment.  Note that the original article recommends the use of the FunCube Pro+ SDR Dongle, which costs approximately £125 (GBP) at the time of writing.  In fact, it is entirely possible to undertake this project using a much cheaper RTL2832U based SDR dongle.

I have used the NooElec NESDR SMArt dongle which can be obtained from the manufacturer and other major retailers such as Amazon for approximately £25 (GBP) at the time of writing. This reduces the cost of the entire project to perhaps £60 (GBP) to build an antenna and set up the dongle assuming you have a suitable computer available to run Spectrum Lab.

Details of my setup and some useful information about the science of Meteor Scatter detection can be found in a presentation I have given, Meteor Scatter Detection -Advanced.

The starter conditional actions available from the BAA are good for testing, but suffer from a number of deficiencies.  In another presentation (pages 25 – 28), Paul Hyde explains that the basic conditional actions set run on a cyclic basis, typically 5 or 10 times per second depending on your Spectrum Lab configuration. The upshot is that the actions run in a different processor thread to the actual FFT process which monitors the data stream for meteor signals. By the time the conditional actions are triggered by the output of a single FFT, multiple further FFTs will have been executed, rendering the readings of signal, noise, peak frequency, etc. taken by the conditional actions invalid.

Instead he recommends switching off the cyclic processing of conditional actions and instead triggering them each time a new FFT is run. This overcomes the above problems and produces valid data. A simple example of a few lines is provided in the above article, which I have used as the basis to develop a much more comprehensive setup.

VERY IMPORTANT: The new conditional actions have been tested and work with Spectrum Lab version 2.93 b8. They definitely do not work with Spectrum Lab version 2.94 b2 and your mileage may vary with other versions. The problem is that the conditional actions rely on being able to read and write particular Spectrum Lab internal variables which are available in the tested version, but disappeared in the later update. The author of Spectrum Lab confirmed that this is a bug and hopefully it will be rectified in a subsequent update!

In order to use this configuration open the ZIP file and proceed as follows:

If you open the conditional actions dialog via ‘File -> Conditional Actions…’ you will immediately note that the ‘Cyclic’ option has been disabled and the ‘on FFT’ option enabled. This causes the ‘new_spectrum’ condition to become true at line 18 each time a new FFT is processed. This line captures the key signal and noise data which is them monitored and used by the rest of the conditional actions. 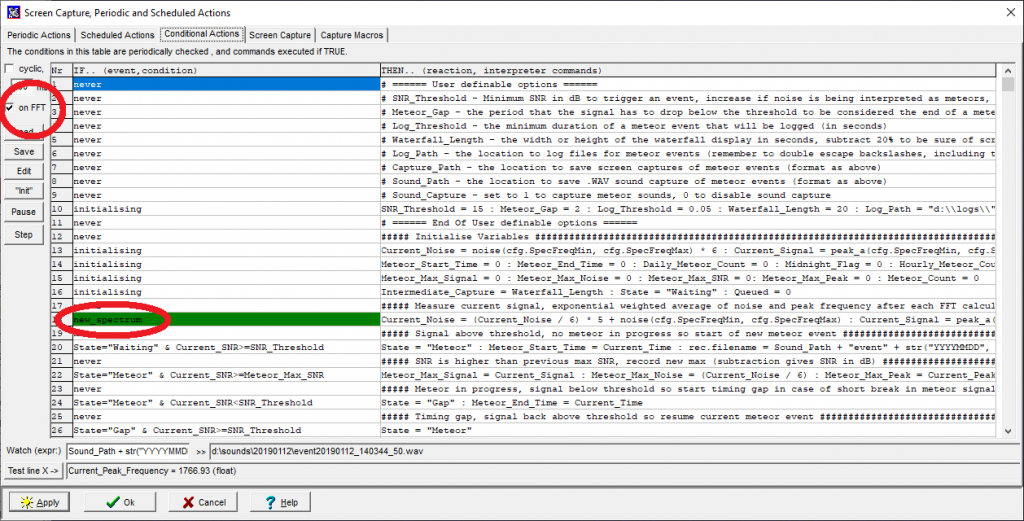 The script is well documented with comments and uses meaningful variable names so that you can figure out what is going on. (As an aside, it’s the bane of my life that amateur software developers still use meaningless variable names like ‘a’, ‘b’, ‘c’, etc. making it painful to deduce how their code works!)

As the conditional actions model used by Spectrum Lab is headache inducing even for a seasoned professional software developer, the core of this script is a Finite State Machine with a number of other side actions queued or triggered using timers. Basically the ‘State’ variable tells you (and the script) what is going on, whether waiting for a meteor, monitoring one, logging it, etc. The current state is also displayed near the bottom of the programmable button set on the main waterfall display, hopefully simplifying debugging of any problems.

The activity of the script is controlled using the user-definable variables set in line 10. These are documented in the preceding lines but remember that you need to click the ‘”Init”‘ button to re-initialise everything before any changes become valid. The key ones that you may need to change are:

SNR_Threshold: This is set to 15 dB by default. You may need to increase it if you are getting too many false positive detections, or reduce it if you are missing meteors.

Waterfall_Length: The configuration marks the waterfall display once a second along the bottom of the screen. Count the number of seconds that fit on to your display and subtract 20%. This will trigger the screenshot of a meteor when it is close to, but not at, the left hand edge of the waterfall display maximising the chances of capturing the whole event.

Log_Path, Capture_Path, Sound_Path: Set the paths where you want to store your files. Note the use of double backslashes ‘\\’ as Spectrum Lab uses ‘\’ as the escape character in strings. NOTE: The folder must exist and be writeable by Spectrum Lab otherwise capturing / logging will fail silently until you fix the issue and restart Spectrum Lab.

The programmable buttons on the left of the main waterfall display provide the following functions:

M31 – The Andromeda Galaxy
LBN552 and Other Dusty Stuff