The histogram is probably the most important tool available in any astro-imaging application, both for capturing images and for processing them once captured. For those just starting out in astrophotography, the histogram is also one of the simplest but most frequently misunderstood tools.

In this short guide will explain the histogram; both what it means and how it can help you to make better images.

Despite the fact that it is such an important tool, many applications treat the histogram as a bit of an afterthought. It is often displayed without any labels or explanation, plotted at too small a scale to be useful and with no ability for the user to zoom in or otherwise manipulate the display. Perhaps it is not surprising that it causes so much confusion.

Before I explain the mysteries of the histogram, we just need to review a few basics of computer images. As you may know, they are made up of a grid of Pixels, each of which represents a small part of the overall picture; see below for an example.

In a monochrome (“black and white”) image, each pixel is recorded as a number which corresponds to how “bright” it is. A value of zero means that pixel is black and the maximum value means it is white. The numbers in between represent the different shades of grey.

In a typical monochrome image, the maximum value in the image file depends on the number of Bits recorded for each pixel.  An image with 8 bits per pixel will contain values between 0 and 255, making for a maximum of 256 different shades of grey (remembering to count black and white as shades!)  At 16 bits per pixel, values will range from 0 to 65,535 making for 65,536 different shades.

Colour images work in the same way, except that three numbers are recorded representing the amount of Red, Green and Blue in each pixel. By mixing these three Primary Colours in different proportions, we can create any other colour. The more bits per primary colour the more possible combinations of the three primary colours there are:

In reality, the human eye cannot distinguish more than 16.7 different million colours. Images with more colour combinations than this will usually be converted by your computer’s graphics card to compress the colours in to a much smaller range that the monitor can display (called a Gamut). Nonetheless, the extra colour depth in an image is very useful when processing them, since astro-images generally require us to identify and enhance tiny differences in colour and brightness.

We use the term ADU (Analog to Digital Unit) to refer to the pixel values that the camera stores in the image file in order to distinguish them from the (usually) smaller number of brightness levels that are actually displayed on the screen.

As a final complication to bear in mind, computers like to work in multiples of 8 bits (a Byte). So a 12 or 14 bit ADU will occupy 16 bits in the image file.  Depending on the camera and software used, the extra bits may be left unused, or each ADU from the camera may be multiplied so that it fills the 16 bit number space in the file.  If so, each 12 bit ADU value would be multiplied by 16, and each 14 bit ADU multiplied by 4.

If that is all a bit too much to take in, just bear in mind that each pixel in our image is represented by numbers, and the bigger the number, the brighter that pixel is.

So What Is a Histogram?

So the image you have worked so hard to create is just a bunch of numbers in your computer, and as we’ll see the histogram is an important tool for understanding those numbers.

A histogram is just a bar chart which shows how many pixels have each ADU value. Below is a simplified mock-up of a histogram to illustrate the point:

The full range of potential ADU values is plotted along the horizontal axis of the chart. In the above example you can see that we have values ranging from 0 (black) on the left to 65,355 (white) on the right. If you were paying attention earlier, you’ll realise this histogram is from a 16 bit monochrome image.

Note: In this simple example I’ve mocked up the histogram using 21 ADU values at intervals between 10 and 65,535. In a real histogram there would be a bar for each ADU value. I have used a small number of points so I can show you what is going on more easily.

In the case of a colour image the histogram may be displayed in different ways:

We’ll stick with out monochrome example for now, but we will take a look at a real example of a colour histogram later on.

Our sample histogram is a fairly typical for a deep-sky image (a daylight image or a picture of the moon would produce a rather different histogram). Below I have annotated our example to help you interpret it.

In summary, the histogram tells us about the range of brightness in our image. It is important to note that the histogram contains no spatial information whatsoever.  In other words you can’t tell which pixels belong to which features in the image by looking at the histogram. For example it doesn’t distinguish between pixels that are a particular shade of grey because of light pollution and other pixels of the same shade because they are part of a galaxy arm or nebula.

The histogram is very useful for figuring out if you have properly exposed your image. There are two main problems to watch out for:

Below is an example of a histogram taken from a monochrome image of the Andromeda Galaxy. As you can see, the practice matches up to the theory quite nicely.  We have a big peak near the left of the histogram which represents the sky background. This is followed by a ‘shoulder’ to just to the right which represents the faint outer regions of the galaxy, and a long ‘tail’ running away to the right, which includes the brighter inner parts of the galaxy and the stars. 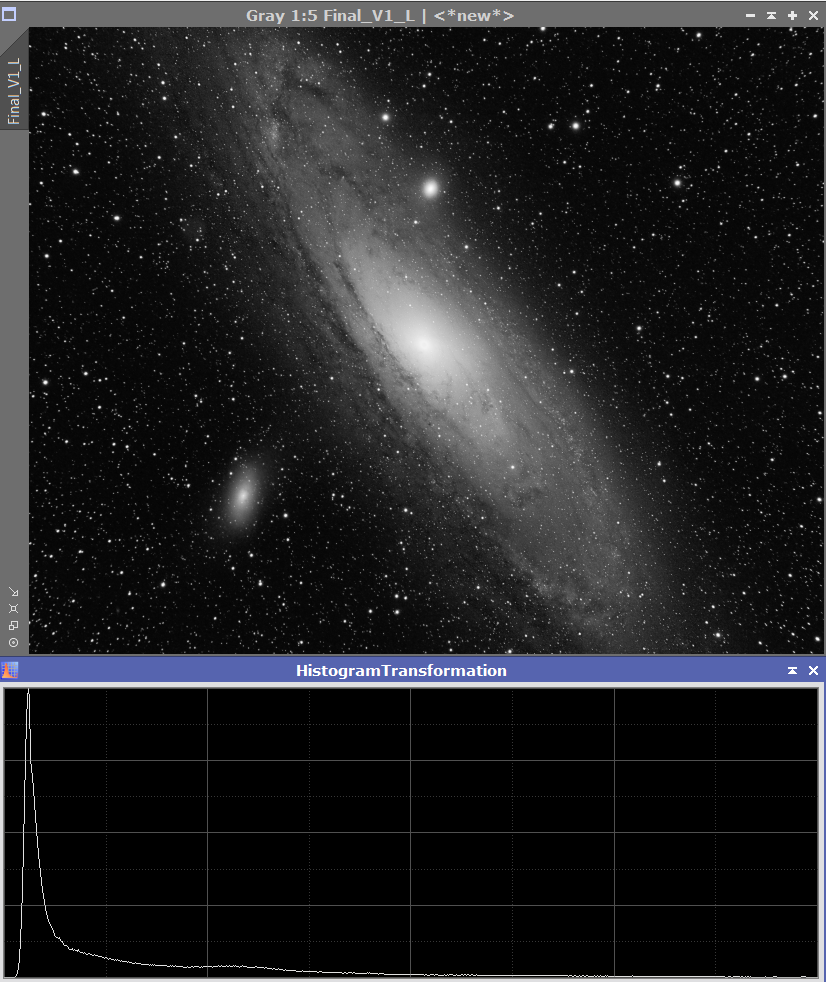 In the three images below, I have highlighted the background, mid-tones and highlights in green and the corresponding portion of the histogram in pink (click on the images for full-sized versions). 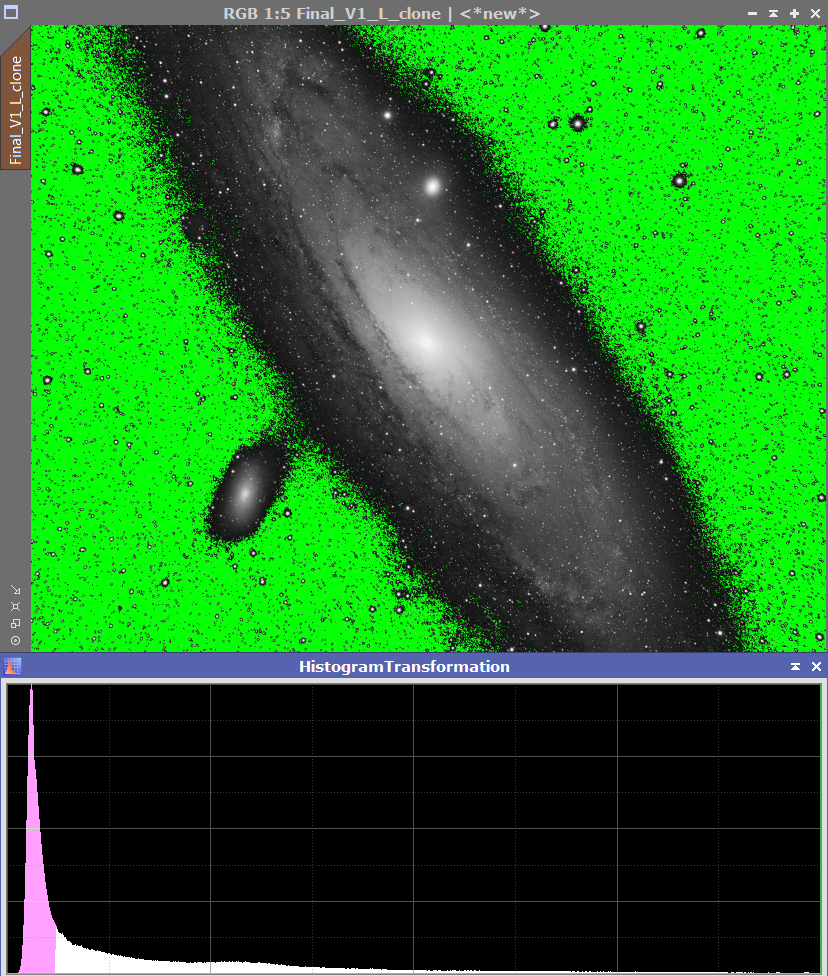 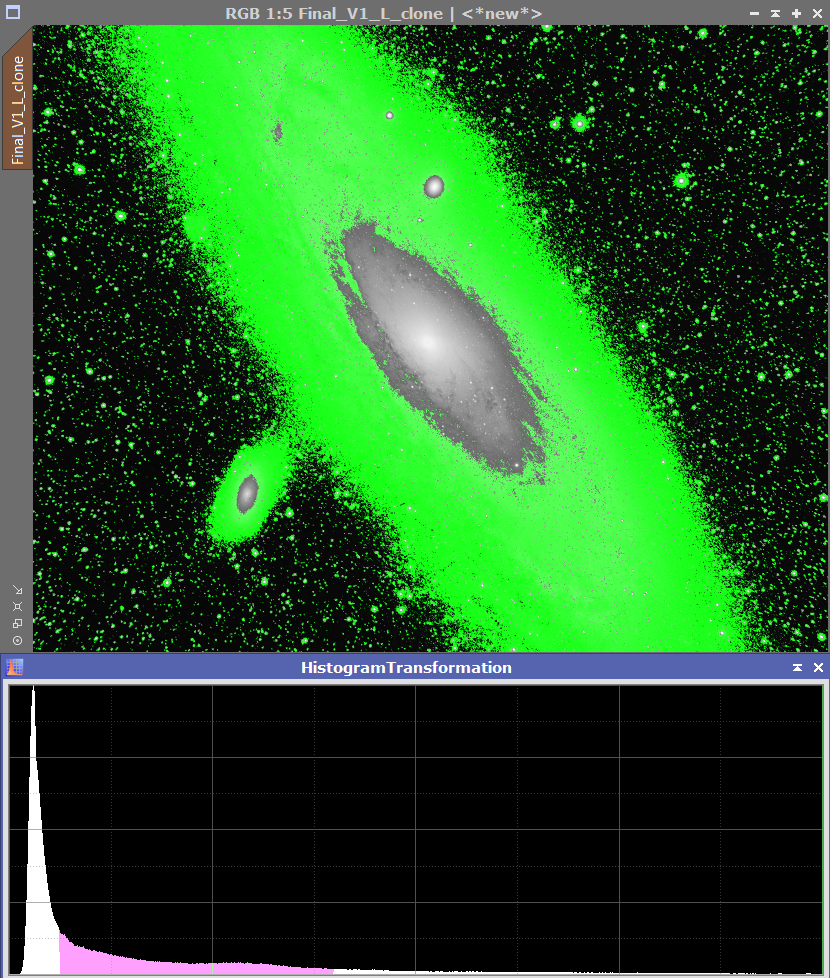 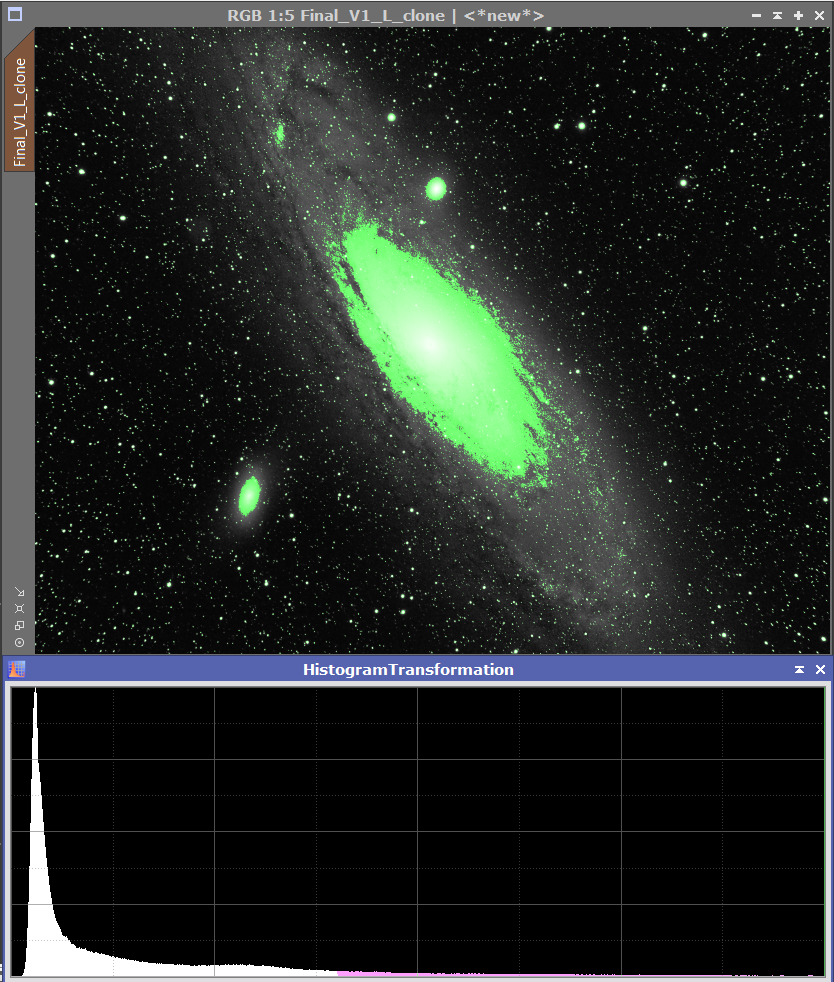 In my example you can see that the dividing line between the background and the galaxy appears to be well defined with a clear line where the sky ‘stops’ and the galaxy ‘starts’.  Don’t be fooled though, that is simply because I have already processed this image to bring the faint outer arms of the galaxy out from the sky background. In an unprocessed image, the boundary is much less well-defined. Indeed, much of the art in processing astronomical images is finding that boundary and carefully brightening the target without bringing along all the unwanted noise that lurks in the image.

The final example below is a histogram of the colour version of the same image. You can see that there are three histogram curves overlaid on top of each other corresponding to the the red, green and blue values of each pixel in the image. 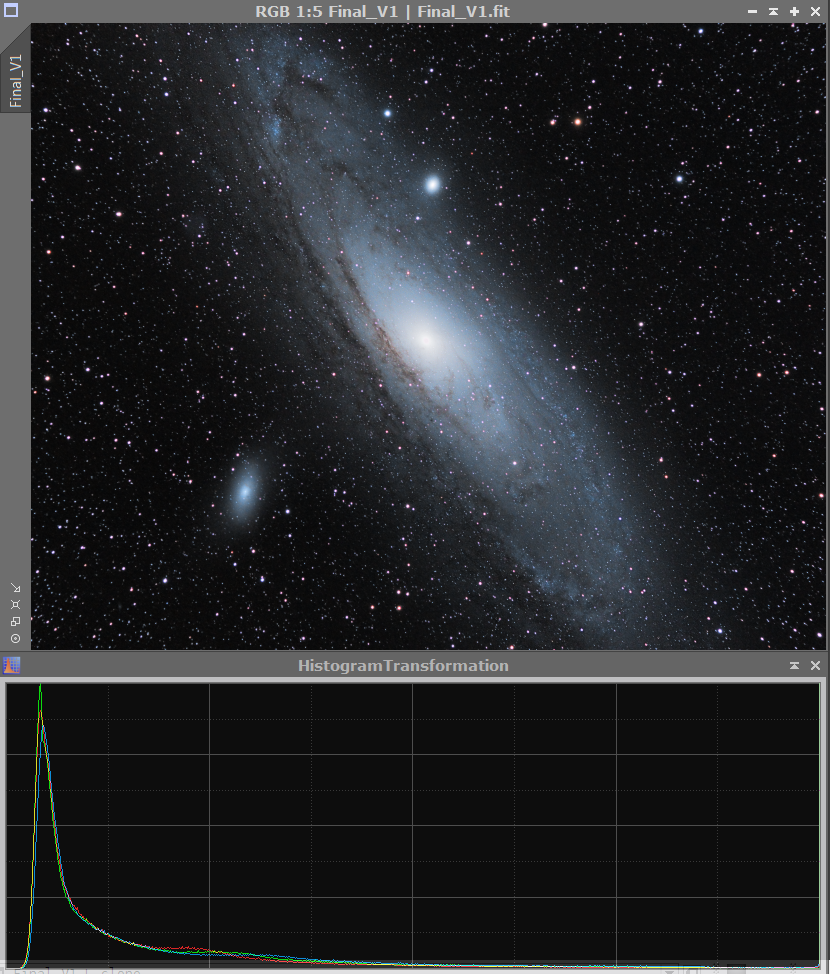 Hopefully this quick run-through has cleared up some of the mysteries of the histogram, as well as demonstrating how useful it can be in analysing your images.