When planning to build a small observatory for my imaging gear, my aim was to make it as small as possible in order to save cost and also to make it easy to build and maintain. There are a number of rough guides to building small observatories on the web, but one key consideration seems to be glossed over in all of them. That is how to determine the space needed for the scope and German Equatorial Mount (GEM) to operate without colliding with the floor, walls or roof of the observatory.

As we will see, the calculations are relatively straightforward, but the slightly counter-intuitive nature of GEMs makes it less than obvious to figure them out from first principles. Following this guide, you can work it all out with a tape measure, paper and pencil and some string  in a couple of minutes flat.

What we want to know when designing our observatory is how far will the furthest piece of equipment on the mount will reach in any given orientation. If you are building a full-sized observatory, this is not a critical issue. Since you will want to leave plenty of space for the observer(s) to move around the scope, you may just decide to make the observatory ‘big enough’ and leave a lot of extra space around the mount.

In my case I am aiming to build an observatory purely for imaging purposes. I will operate it remotely and so I want to make it as small as physically possible whilst leaving sufficient room for the equipment. The pier will be cast from concrete and so I need to get things right first time. 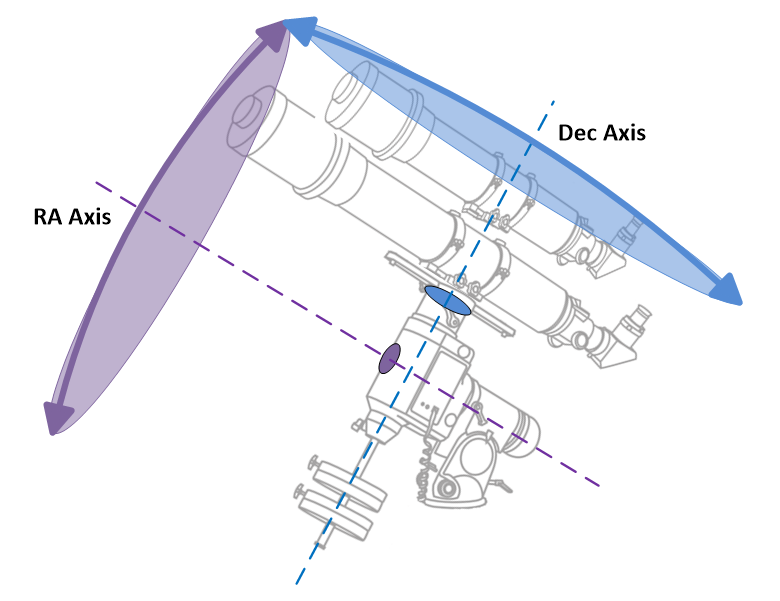 As you no doubt realise, a GEM points the telescope by rotating it around two axes; the Right Ascension Axis (RA), shown in purple in the diagram, and the Declination Axis (Dec) shown in blue.

This means that the telescope has two degrees of freedom (movement around the RA axis and movement around the Dec Axis). The furthest point our equipment can reach must lie on the surface of a sphere with its centre where these two axes intersect (the meeting point of the blue and purple dashed lines above).

This is common sense of course, since the purpose of the mount is to track stars as they move across the celestial sphere. That said, the furthest point our equipment reaches is not necessarily the front of the scope! 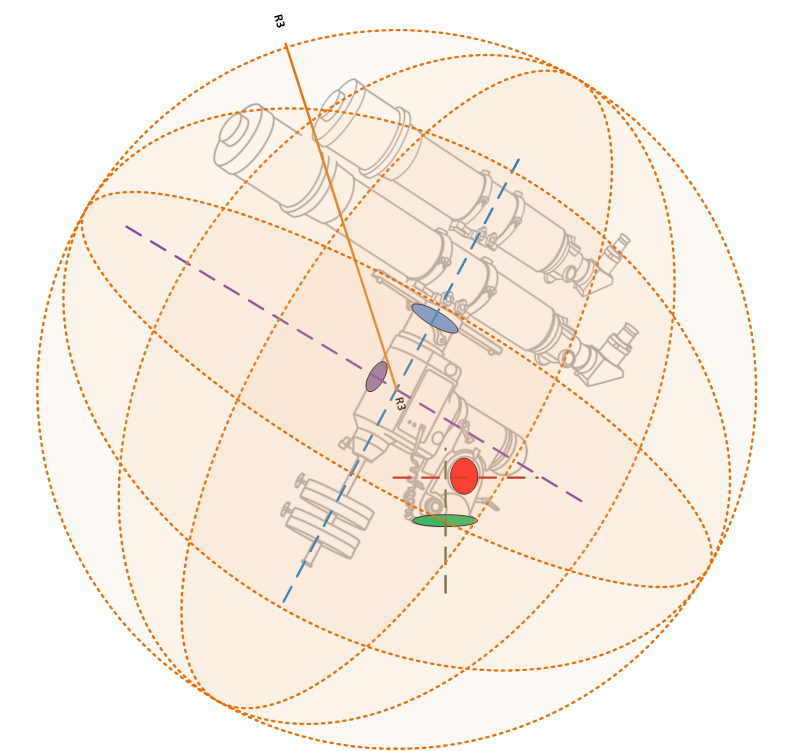 So what we need to do is measure the distance to the furthest point that the equipment can reach. There are two ways to do this. The conservative way is to take two measurements and then do a bit of Pythagoras: 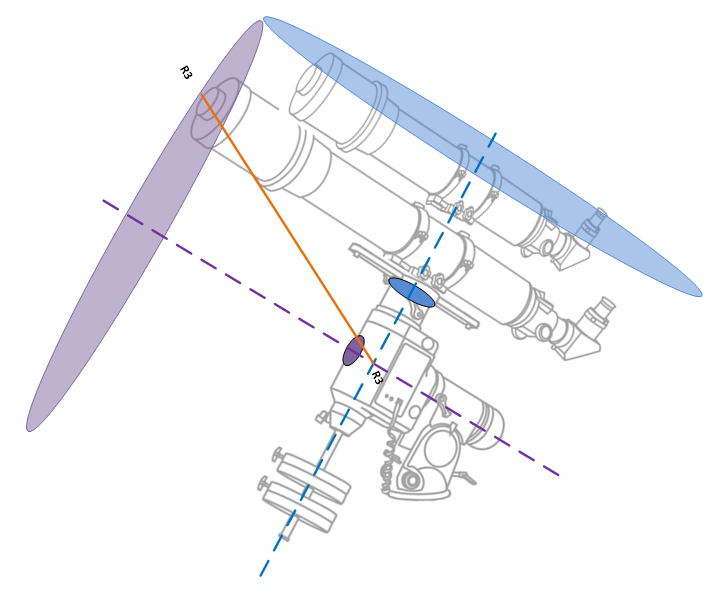 As you can probably see, if you have a piggy-back set-up you may end up with a slightly smaller measurement using this method, and it will be at the front of one of the OTAs or back of one of the cameras. If you have a single OTA, the value for R3 should be the same as for the Pythagorean method above. Again it will usually be at the front of the OTA or the back of the camera.

For a side-by-side set-up the string method is much better than the Pythagorean method above.  Instead of measuring in a flat plane though, you’re going to have to measure in three dimensions and exercise a bit more judgement. You need to measure the furthest distance between the centre of the mount (where the axes cross) to the most distant ‘corner’ of your side-by-side rig. Since you can’t put your hand in the middle of solid metal you’ll have to measure from one side of the mount or the other (as shown above) but stretch the string out to the four ‘corners’ of the side by side rig, i.e. the furthest point on the front of each OTA, and the furthest point on each of the cameras.

Once you have found the longest distance, add a few extra cm to the value of R3 to account for the fact that you didn’t start the measurement in the middle of the mount, but instead off to one of the sides.

Now we have a value for R3, we know the maximum extents the scope can reach is a sphere centred on the intersection of the two axes with a radius of R3. To transfer this to your observatory plans, you just need to draw a circle with a radius of R3 that is centred on the intersection of the mount RA and Dec axes. This will work for both plan and elevation views. Anything on the plan that protrudes in to the circle has the potential to collide with the OTA.*

In the first example we can be confident that the set-up in the first example won’t collide with the walls or roof (in elevation at least, we’d need also need to check in plan view). You can also see the minimum pier height required to avoid collision with the floor. This is the set up I went for in my imaging observatory, but it is likely to be far too low for comfortable visual observing. 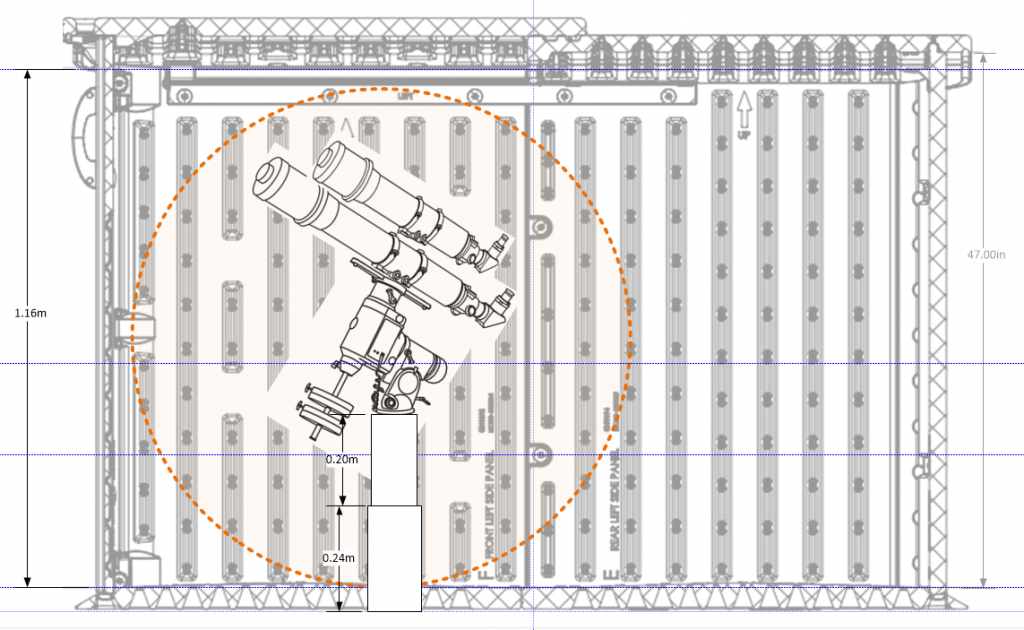 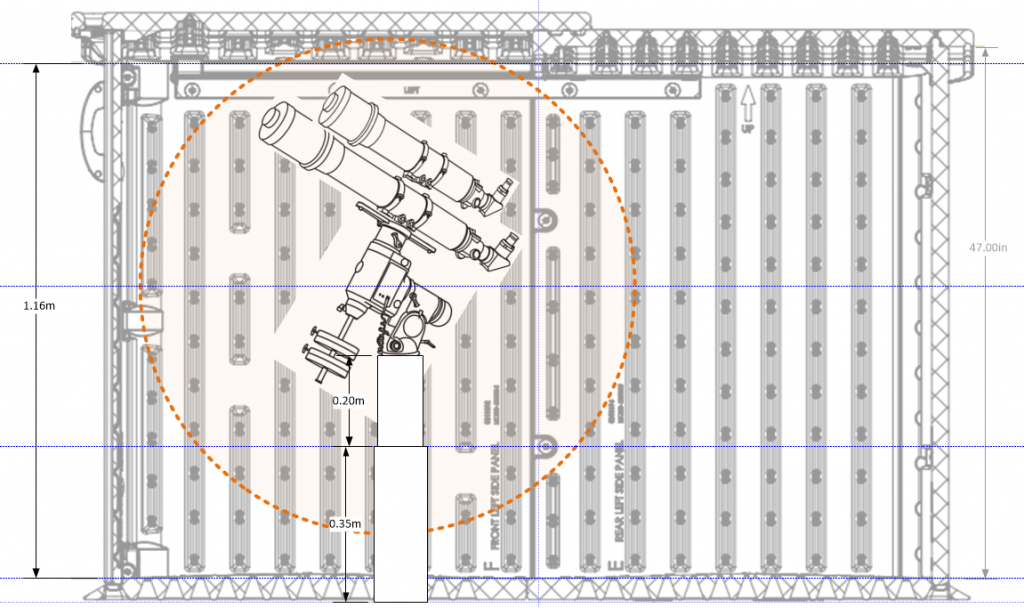 In the second example a much longer pier is used. You can see that the OTA will protrude through the left hand (sliding) roof section, but it will not collide with the fixed section on the right.  Of course in this case we would need to park the OTA below the roof line in order to close it safely.

* There is always one thing that must protrude in to the circle and that is the pier (or tripod). Hopefully your mount handset or control software has the ability to set mount limits to prevent slewing or tracking the mount in to this necessary but immovable object. 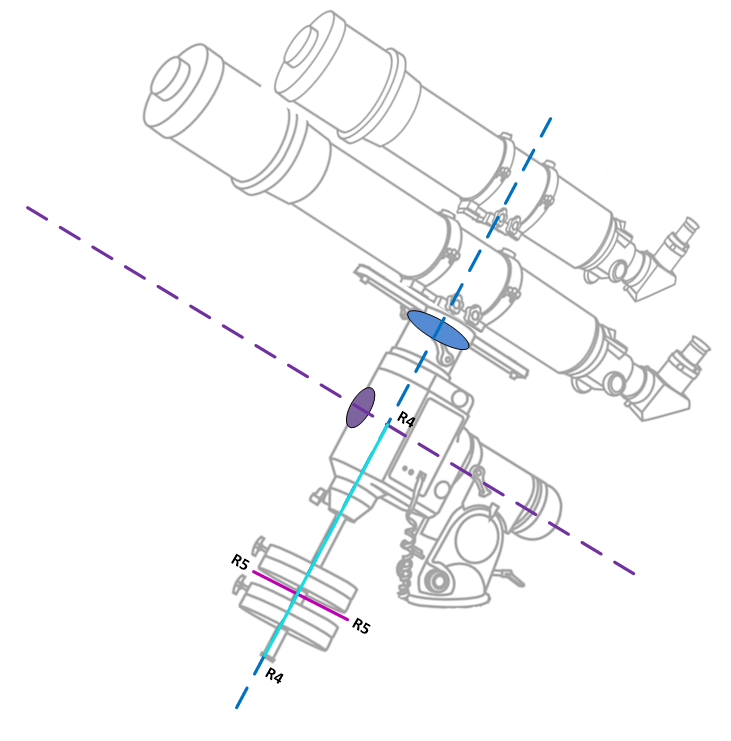 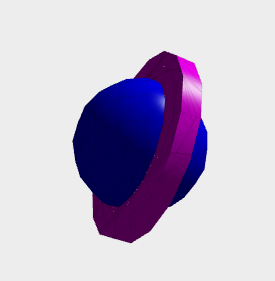 There are a few other considerations to bear in mind:

There are some final wrinkles if you really need to save some space:

In the rest of this series of posts, I’ll explain how I went about building the observatory.