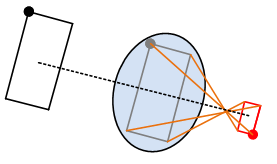 Questions about the best choice of equipment for astro-imaging come up quite frequently. In this first of a series of posts, I will start by explaining the basics of aperture, focal length focal ratios.

These troublesome topics cause many beginning imagers to jump to mistaken conclusions. If you bear with me you’ll find out how they (and other things) affect imaging and consequently you will be able to make better informed choices about your equipment.

So what is a focal ratio?

“Focal ratio” (f-ratio) is a common term you will come across in the world of photography. It is a number that is used as shorthand for the “speed” of a camera lens and is expressed as “f/2”, “f/4”, etc. Lower numbers are “faster” than higher numbers, meaning that you can take a photograph using a shorter exposure length with an f/2 lens than you can with an f/4 lens. The simple rules used in photography don’t carry straight over to astro-imaging though, as we’ll find out.

The f-ratio of a camera lens or a telescope can be calculated very simply as:

To give another example, my SkyWatcher 80ED has a focal length of 600mm and an aperture of 80mm and thus it is an f/7.5.

If you are using a focal reducer or a Barlow lens in your set-up, you should include the resulting decrease or increase in effective focal length in the calculation as follows:

Note: The f-ratio is a dimensionless number, i.e. it does not have any units. Provided you use the same units for both aperture and focal length you can calculate the f-ratio correctly. Don’t mix up mm and inches in one calculation!

A better definition of f-ratio

Unfortunately that shorthand of equating f-ratios to speed or exposure time has the potential to be very misleading when it comes to astro-imaging. So let’s use a more precise definition:

The f-ratio determines how much light a telescope (or lens) will concentrate in to a given area.

Now you may think I’m just nit-picking here. Surely if a lower f-ratio illuminates the sensor more, then any object you are trying to image will appear brighter to your camera and thus you will be able to take a shorter exposure? Yes and no; the image will appear brighter but that doesn’t necessarily mean you can take a shorter exposure. Bear with me a whilst we explore f-ratios a bit further and we’ll come back to that point later in the series…

Firstly, let’s explore how much light you get for each f-ratio. The graph below shows how much less light would fall on a given area (say a pixel in your camera sensor) as you increase the f-ratio. I’ve arbitrarily chosen f/2 as the staring point and called that 100%, and then shown what percentage of light would fall in the same area on the camera sensor as we increase the f-ratio.

The simple rule is that every time you double the f-ratio, you get a quarter of the light of the previous ratio.

There are two ways in which we can vary the f-ratio of our telescope (or lens). One way is to change the f-ratio by changing the aperture and keeping the focal length the same. I’ve illustrated this below:

In terms of illumination, the relationship is the same as we explored for f-ratios above – halve the aperture (whilst keeping the same focal length) and you will get a quarter of the illumination. There is no magic involved here, it’s a simple matter of geometry.

Note: Telescopes have fixed apertures, so if you want a bigger aperture you have to buy a bigger scope. Camera lenses have a Diaphragm which allow the aperture to be made smaller or larger as required. If you are a photographer looking for your first telescope, it is easy to fall in to the trap of assuming that a faster f-ratio always equals more light when in fact it might be due to focal length…

The second option for changing the f-ratio is to change the focal length whilst keeping the aperture constant. In terms of illumination, the following occurs:

In this case the relationship is that if you double the focal length, you get a quarter of the illumination. Again, it’s a simple matter of geometry as you can see from the illustration below:

We’re imaging objects that are at infinity, so doubling the focal length of your scope or lens will also double the “magnification”. An image of a straight line that is 1mm long on the camera sensor at a focal length of 500mm would be 2mm long if you increased the focal length to 1,000mm (left hand side of the illustration above).

In the real world the boxes that we are concerned about are the pixels on our camera sensor. By doubling the focal length, we put one quarter as much of the incoming light on each pixel.

Note 1: We aren’t really imaging objects that are infinitely far away, but they are as close to infinity as makes no practical difference to the optics of your telescope or lens.

Note 2: Fitting an image of a galaxy that is hundreds of thousands of light years across on to a sensor that is 20 or 30mm across hardly counts as magnification! When we use the term “magnification” in this context, we should really say that we are increasing the apparent angular separation of features in the image.

There is an important rider on focal length, in that it breaks down when we start dealing with Point Sources. A point source is anything which:

In the case of a point source, focal length has no relevance; the brightness of the object at the camera sensor is determined entirely by the aperture of the scope. In other words, you can’t make it any brighter by reducing the focal length (thus reducing the “magnification”) – it’s already as small as it can be.

All f-ratios are not created equal

The observant amongst you will have noticed that the two methods of changing f-ratio have very different consequences. Increasing aperture leads to a lower (“faster”) f-ratio by gathering more light, whereas reducing focal length does the same by shrinking the image and thus concentrating the same amount of light on to a smaller area.

So that means one f/10 scope is just as good as another, right? Not necessarily:

We’ll examine these issues in more detail in Part 2 of this series before drawing some conclusions.