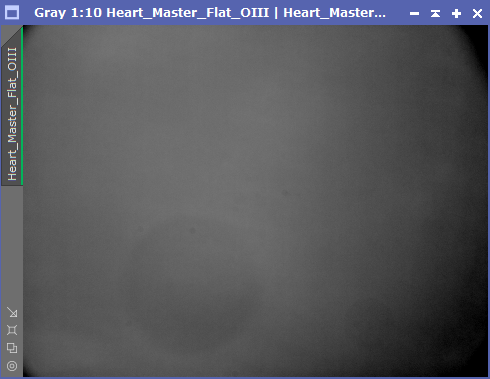 When astro-imaging, taking flat frames is essential to calibrate your images. A flat frame is just an image of a uniformly illuminated, featureless surface that essentially creates a “map” of how light travels through the telescope, filters and camera. When processing the images, the light frames (i.e. images of the night sky) are divided by the flat frame. This corrects for any differences in illumination caused by vignetting (drop off in brightness at the edges and corners of the image), shadows caused by dust on the sensor and differences in the response of individual camera pixels to incoming light.

Flat frames can be made by taking images of the twilight or dawn sky and processing them properly, but the most convenient method is to use a light box or flat panel as the source of illumination. A manual light box or panel is easy to make using foam board and white LEDs, but must be placed on the end of the telescope each time it is to be used. Commercially made light boxes that can be remote controlled by imaging software such as Sequence Generator Pro are available but cost anywhere from £170 and upwards depending on size and features.

In this post, I’ll explain how to build a remote controllable flat panel for less than £25 that will enable you to automate another aspect of your observatory without breaking the bank.

The parts list for this build is relatively short:

Firstly test the LED tracing panel by plugging it in and examining it visually to see if the illumination is obviously uneven. Before proceeding further I’d also recommend taking some flat frames using the panel and your telescope and camera. You may need to adjust the brightness of the panel or even dim it further by placing one or more sheets of white paper between the panel and telescope. A good method to test the panel is to take a flat frame, rotate the panel 90 degrees relative to the telescope and take a second flat frame. Now calibrate the first flat frame (treating it as if it was a light frame) using the second flat frame in your favoured image processing software.

Stretch and check the resulting calibrated frame, looking for any banding, gradients or uneven illumination. If the panel creates a nice even field, you should end up with an image that is a single tone of grey or white across its entire area. Any differences across the frame will either be due to poor flats technique (beyond the scope of the this post to explain) or a panel that is not evenly illuminated. If the results are unacceptable, this is your opportunity to return the panel for a refund and try a different model.

Note: These USB tracing panels don’t appear to draw much current, but if yours doesn’t illuminate you may not have sufficient power available from that USB port. Certainly test the panel using whatever USB port you intend to use in your observatory. If you’re using a USB hub, you’ll probably need one that takes an external power supply in order to provide sufficient current to drive the LEDs. If plugging directly in to your computer, be aware that blue (USB3) ports provide more current than standard black (USB2) ports, and orange (USB3 charging ports) provide even more.

Assuming you’re happy with the panel and willing to invalidate your warranty, next you will need to perform some surgery on the panel.

Now we need to do a bit more soldering to create the following circuit:

You should end up with something that looks like this: 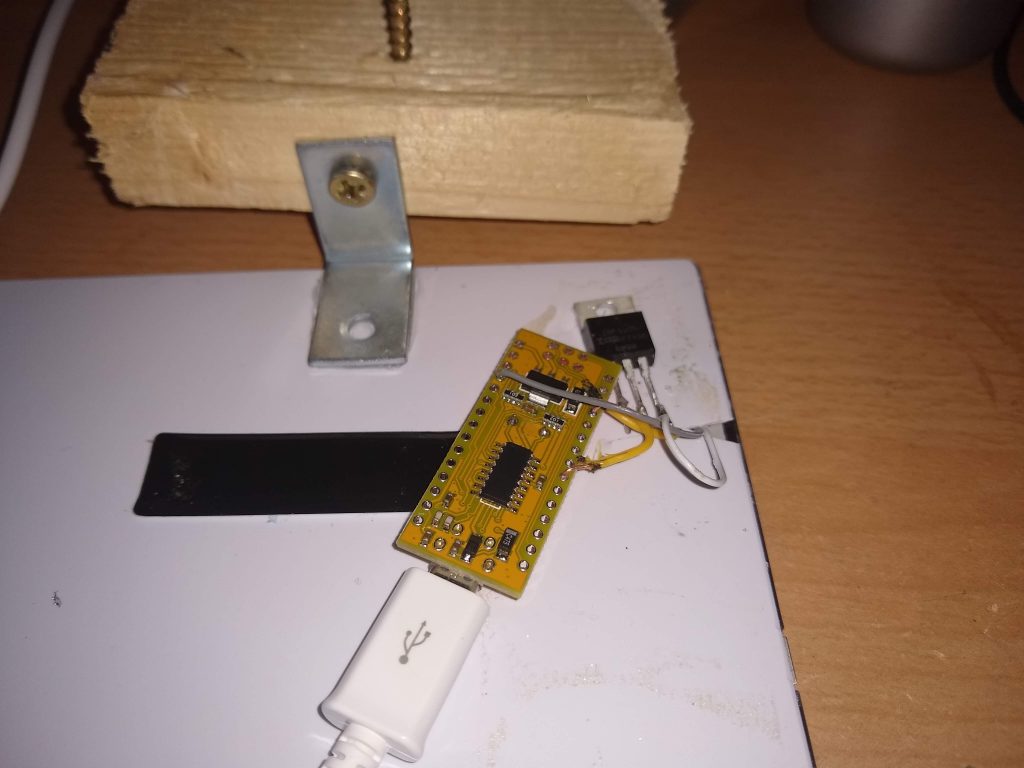 Note that the positioning of the wires is a bit unclear in my photo – the white wire is definitely attached to the middle leg of the MOSFET even though it looks otherwise. Once you are happy with your wiring and soldering, plug the Arduino’s USB port in to your computer USB port, again being aware that it needs to provide sufficient power to drive the LED strips as identified in testing above. Hopefully there will be no sparks or magic smoke, and the small LEDs on the Nano should illuminate as they did before. If not, double check your connections for short circuits; it is possible to fry the Nano in some circumstances but they’re fairly robust usually.

The purpose of the circuit we have built is to switch the LED panel on and off and to control its brightness. The Arduino can output sufficient current at +5V to illuminate the LEDs via its +5V or RAW pin, but this is always ‘on’ when the Arduino is plugged in to the USB port which isn’t much use. The controllable output pins (D1 through D12 or similar) can be switched on and off by the microcontroller at will, but can only output a very small amount of current which is insufficient to illuminate the LEDs.

So what we do is use the MOSFET as a switch. We feed the large current from the +5V or RAW pin on the Arduino to the LED strip via its +5V wire. We then feed the returning GND wire from the LEDs in to the Drain pin on the MOSFET, allowing the current to flow in to the MOSFET and then back out of the Source pin and on to the GND pin of the Arduino thus completing the circuit. The clever bit is that we attach one of the low current digital (D) pins on the Arduino to the Gate pin of the MOSFET. When the Arduino D pin is off, the Gate pin is also off and no current flows through the Source to Drain pins. As soon as switch on the Arduino D pin, the small amount of current it provides switches on the MOSFET and allows the much larger current to flow through the LEDs and MOSFET.

Importantly we don’t use just any old Digital (D) pin on the Arduino to switch the MOSFET on and off. We must use on of the pins that allows PWM output. PWM stands for Pulse Width Modulation, and effectively the output from the pin cycles on and off rapidly. We can set the PWM cycle to be 0; off all the time, 128; on 50% of the time, 255; on 100% of the time or any value in between. The rapid switching on and off causes the LEDs to switch on and off rapidly which to our eyes (and the camera) appears to be dimming the LEDs. Thus we have modified our LED panel from its original 3 levels of brightness to 255 levels of brightness! In my case I have used pin D6 which is one of several PWM capable pins on the Nano.

In order for all this to work of course, we need to program the microcontroller to control the LEDs and to talk to our image capture software.

In order to make our flat panel respond to these commands, we need to program it. Open up the Arduino IDE and ensure that it can still talk to your Nano or other board. ‘Tools -> Get Board Info’ will return a small amount of information about the board if it is working:

Assuming the sketch compiled and uploaded, it is time to perform some tests:

Note: The Arduino sketch is not very forgiving of incorrect input values, so if you send an invalid command, the serial monitor may hang up and not allow you to enter any more commands. Don’t panic, just unplug the USB cable, wait a moment and reconnect to reset the Arduino. You do not have to re-upload the sketch as it is stored permanently by the device until you upload a different one. 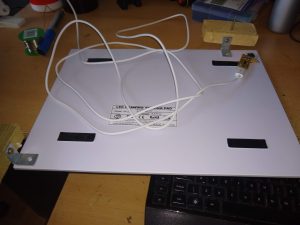 Once you are happy the panel is working, you will probably want to deal with the shiny reflective surface of the panel. This isn’t ideal as reflections between the panel and the scope can create gradients and bright/dark spots in the flat frames. The solution is simple enough, get some fine-grade wet and dry sanding paper. Using a small amount of water wet the paper and gently start sanding the front face of the panel using small circular motions.

Don’t sand back and forth as this will create other problems, just work slowly and patiently over the whole panel in small overlapping circles, wetting the paper and removing the dust that is created. Fairly quickly the reflective surface will become a nice matt surface ideal for making flats.

Next secure the Nano and MOSFET to the back of the tracing panel; I just cut a length of strong Duck Tape and used it to stick the parts down, ensuring I didn’t create any short-circuits in the wiring. In order to mount the panel in my observatory, I used superglue to fix a couple of small metal brackets to the rear of the panel, and then screwed a couple of wooden blocks to the brackets.

The panel was then secured to my observatory wall using a couple more screws through the wooden blocks. The panel is positioned far enough away from the scope and mount that nothing can collide when the scope is in use, but sufficiently close that the scope’s entire field of view is filled by the panel when pointed at it. I created a custom park position in EQMOD to ensure that the scope is centered on the panel and square with it when parked. 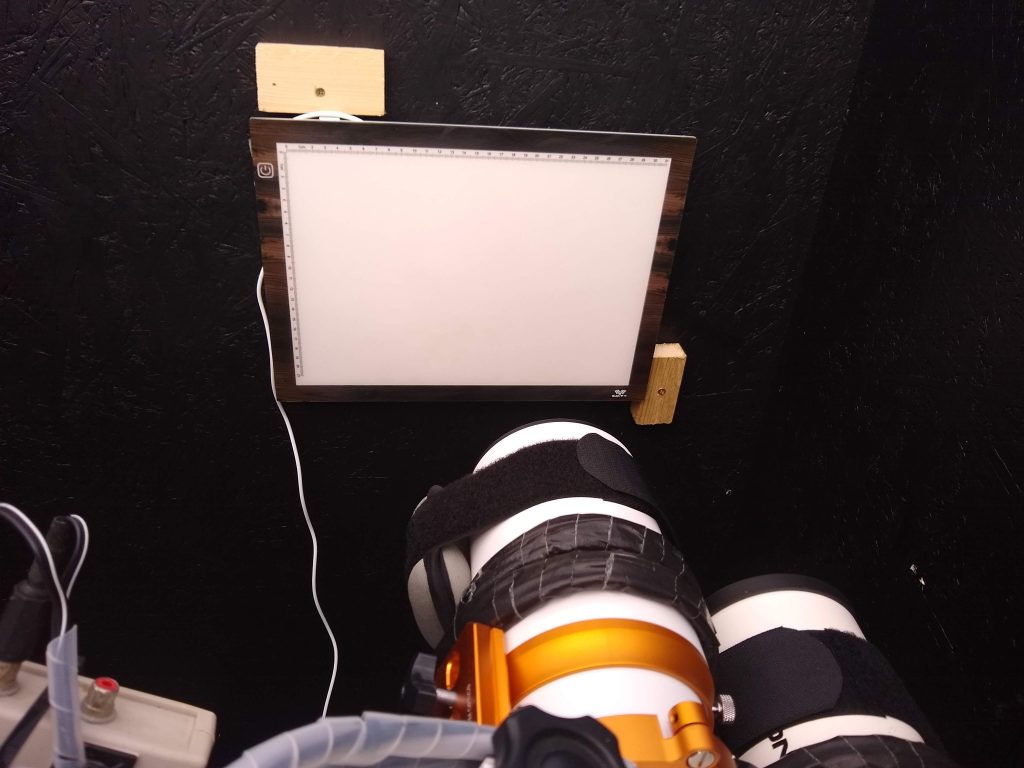 You will have to determine the best location and means of mounting the panel; my observatory is (deliberately) small so it was easy to find a suitable way to get the panel to fill the scope’s field of view. If your walls are further away, you may have to mount everything on a fixed or movable framework of some sort. 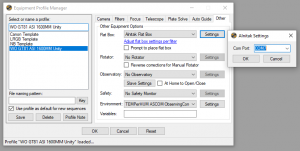 The flat panel can be set up in any imaging software that supports Alnitak flat panels; just select Alnitak (and FlatMan if a model is required) in your software’s configuration screen. You will need to select the COM port to which the panel is connected, either the COM port used in the Arduino IDE, or perhaps a different one if you have a separate observatory computer. Generally speaking no drivers need to be installed for Alnitak panels. The only caveat is that if your Arduino board required serial drivers to be installed as part of the setup process, these need to be installed on your observatory PC too, but this isn’t usually necessary.

N.B. Bear in mind that different sketches may be needed for Sequence Generator Pro vs. N.I.N.A. as described in the programming section above.

At the full (255) brightness level, this panel is bright enough to expose to 25,000 ADU in a few hundredths of a second for LRGB filters, and about half a second for narrow-band filters. I have found that with such short exposures, banding can appear in the LRGB flat frames (dark and light strips). In my case I suspect the cause is flicker/interference caused by the PWM circuit or possibly the camera/mains frequency, but this can also happen with cameras that have a mechanical shutter. Using a much lower brightness (around 10) pushes the required exposure time up to 0.1 to 0.3 seconds. This gets rid of the banding.

For my ASI 1600MM-C (older non-Pro version), exposures of over a two seconds (USB 3) or five seconds (USB2) switch to a different readout mode which can create gradients as the image continues to expose whilst being read out. You’ll have to experiment for your particular setup – you can dim the panel significantly using the brightness settings, and if necessary you can always stick one or more sheets of white paper over the panel to dim it further if you have banding or mechanical shutter issues to contend with.

LBN552 and Other Dusty Stuff
Heart Nebula in HSO